The Cedar of Lebanon 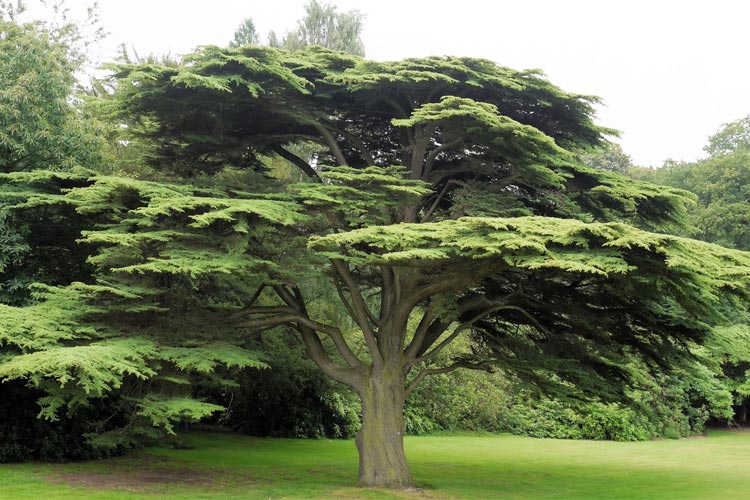 Cedrus libani, commonly known as the Cedar of Lebanon or Lebanon cedar, is a species of cedar native to the mountains of the Eastern Mediterranean basin. It is a majestic evergreen conifer that can reach 40 m (130 ft) in height. It’s the national emblem of Lebanon and is widely used as an ornamental tree in parks and gardens. Cedar is particularly well adapted to mountainous climates where they receive winter precipitation, but is most often found in the UK when planted in parks and gardens of large estates.

With a blackish-brown bark that displays closely spaced ridges and cracks, and slightly hairy brown twigs, The Cedar of Lebanon has a very distinct shape. It’s leaves are dark green and needle-like, with transparent tips, and they are arranged in spirals around side shoots in rosettes or clusters.

It’s flowers are monoecious, which means that they have both the male and female reproductive organs. Male flowers develop on separate cones that are small and greyish- green when immature, but lengthen and turn brown when mature. They then release pollen into the air. Female flowers develop into a green cone, which becomes purple-grey and finally brown when mature, up to 12 months after pollination.

Cedar was thought to represent purification and protection, and represents incorruptibility and eternal life. It was apparently a Jewish custom to burn cedar wood to celebrate New year. The Lebanon Cedar is mentioned several times in the Old Testament. Hebrew priests were ordered by Moses to use the bark of the Lebanon cedar in the treatment of leprosy.

How we use cedar

In the UK, cedar was planted in nearly every stately home and mansion from the 1740s onwards, however it is not commonly planted today. Today cedar is used for its hard, durable wood, which retains a sweet fragrance for many years. An oil similar to turpentine can be obtained from the wood.