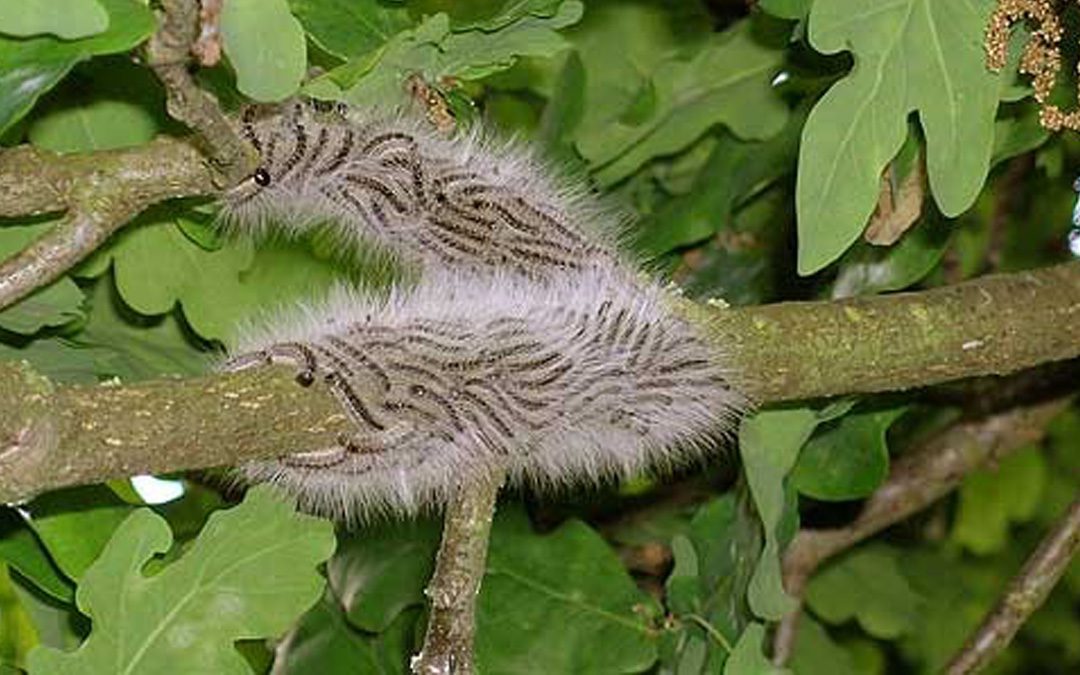 The larvae, or caterpillars, of the oak processionary moth can affect the health of oak trees, people and animals. They feed on oak leaves, and large populations can strip trees bare, leaving them weakened and vulnerable to other threats. A protein in the caterpillars’ tiny hairs can cause skin and eye irritations, sore throats and breathing difficulties in people and animals who come into contact with them.

Due to the health risks, OPM management is a specialist area of arboricultural pest and disease management which needs to be carefully timed and carried out by professionals with appropriate training and equipment. Our highly experienced team will safely carry out OPM Management for you quickly & effectively. Once nests are removed they are securely bagged and safely incinerated in accordance with industry best practice.

The species derives its common name from the fact that the caterpillars live primarily on oak trees and move about in nose-to-tail processions; it derives the first part of its scientific name (Thaumetopoea processionea) from thaumetopoein, the irritating protein in the caterpillars’ hairs.

OPM is a native of southern Europe, where predators and environmental factors usually keep its numbers in check and minimise its impact. However, aided by the movement of live oak plants in trade, its range has been expanding northwards over the past 20 years, and it has become established as far north as the Netherlands and northern Germany.

OPM was first accidentally introduced to Britain in 2005, almost certainly as eggs which had been laid on live oak plants imported from continental Europe. The current distribution of the pest has probably arisen from a number of subsequent, similar introductions as well as spread from the original points of introduction. It is theoretically possible that if it were to spread it could survive and breed in much of England and Wales.

OPM caterpillars are most easily recognised by their distinctive habit of moving about in late spring and early summer in nose-to-tail processions, from which they derive their name, and the fact that they live and feed almost exclusively on oak trees. They can sometimes be seen processing across the ground between oak trees, and clustering together as they feed on oak leaves.