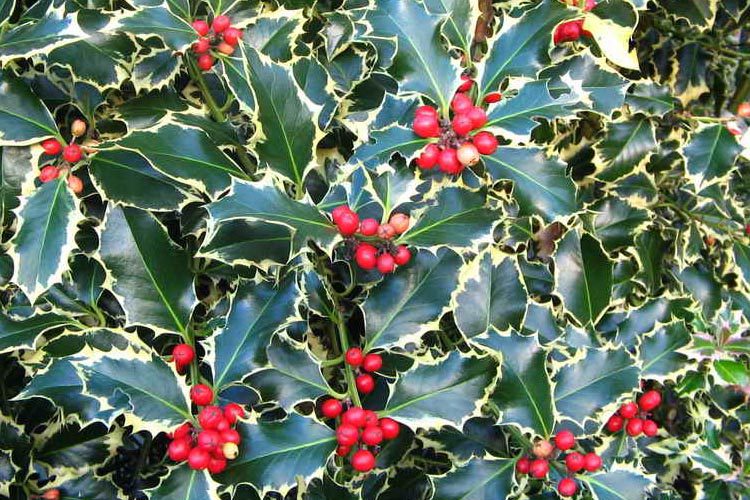 Our Tree of the Month at 4 Seasons Tree Care is the vibrant Holly, otherwise known as Ilex aquifolium. At this time of year holly seems to be everywhere. Whether real or plastic, on cards or in lights; the unique leaf shape of this evergreen tree is a gift to designers.

But this prickly plant is much more than just a Christmas synonym, holly is an integral part of the British landscape.

So, what are the virtues of this potentially underused natural asset and its role in the countryside?

Part of the woodland

Holly is a component of two of the most important woodland types found in the UK: the beech and holly woodland of the south east of England and the oak dominated woods of the wetter northern and western parts of the UK. Both habitats are recognised under the EU Habitats Directive for special protection.

Holly is commonly found outside woodland. It is one of the few evergreens whose leaves do not contain chemicals toxic to livestock, in fact, a holly leaf is surprisingly nutritious given its unpromising appearance.

Although historically holly was used as a fodder plant for stock there appears to be some regional variation in this practice. Richard Mabey suggests, in the Flora Britannica, that while cutting holly for fodder was a common occurrence in Cumbria, Derbyshire and the New Forest, farmers in Worcestershire had no knowledge of the practice.

Some people claim that the leaves only become edible after they have been cut and left for a few days, but I have seen horses and alpacas eat them straight from the tree even when fresh grass is available. Equally, the deer grazed topiary hollies of the Quantocks were always a local talking point.

Another potential virtue of holly is in its use as a barrier to stock. Frequent cutting of holly will result in a dense and stock-proof hedge which begs the question why it is not more often seen in hedgerows.

The spiky nature of the plant makes it difficult to handle but hawthorn and blackthorn are just as painful to manage and almost invariably form the backbone of a hedge. Both of these thorns are relatively quick to grow, and in good soil and climate a stock-proof hedge can be formed from new planting in eight to ten years. Holly, on the other hand, is a much slower growing species, and it can take twice as long to create a similar size barrier.

So, as you deck your halls this Christmas, remember that holly is so much more than just a decoration!