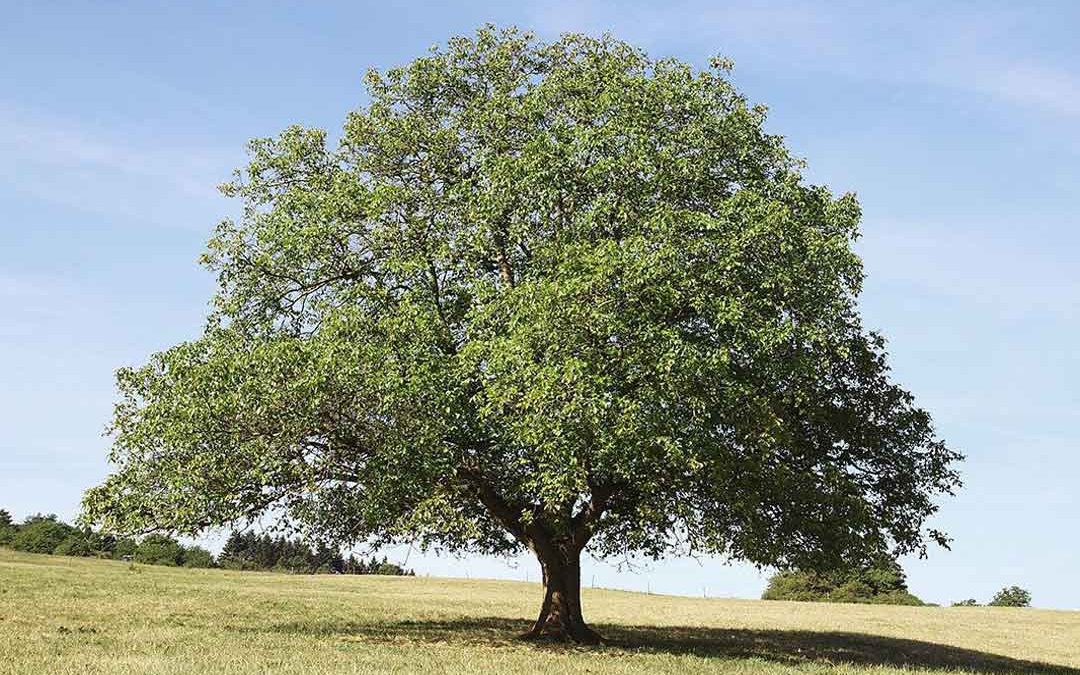 Our Tree of the Month at 4 Seasons Tree Care is the wonderful Walnut tree, otherwise known as Juglans regia.   It’s a deciduous broadleaf tree which is native to south-east Europe and south-west China and can grow up to 35 metres in height.

These trees are now found throughout the UK, particularly in large gardens and parks, and their perfect growing conditions are short winters and lots of sunshine.  They also appreciate well-drained, fertile and alkaline soils, which are not sandy or full of clay.

Typically the walnut tree has a short trunk and a broad crown, although if it’s grown in a woodland setting, the crown can be narrower.  When the tree is still young, it’s bark is smooth and an olive brown in colour, only fading to a silver-grey and developing fissures as it slowly matures.

The twigs of the walnut tree are stout in nature, green in colour and gently curve, hosting shiny, feather-like leaves.  During the Spring the walnut tree will flower, producing male yellow-green catkins which are about 5 – 10cm in length and also female flowers, which appear in clusters of 2 – 5.  The female flowers are pollinated with the help of the wind, and they then develop into a fruit, which has a green fleshy husk and the brown wrinkled walnuts that we love.

We are of course not the only ones who enjoy walnuts.  Many small mammals including mice and squirrels are quite partial to them as well.   The walnut tree also has value for other wildlife as I’ts leaves provide food for caterpillars and micro-moths.

Walnut was originally grown for its nuts and was introduced by the Romans for that purpose. Later it was grown for its timber, which is fine with a decorative, wavy grain.  By all accounts, the best wood is to be found at the base of the tree, so quite often they are dug up for timber, rather than felled.

The English walnut is susceptible to fungal diseases, as well as walnut blight, which causes small black spots on the leaves and can lead to dieback of new shoots and damaged fruit. Walnut leaf blotch can cause leaves to fall prematurely but doesn’t cause lasting damage to the tree.

The walnut’s botanical name, Juglans, originates in Roman mythology. According to an ancient myth, Jupiter, who was also known as Jove, lived on walnuts when he lived on earth. Therefore Romans called walnuts Jovis glans, meaning ‘the glans of Jupiter.’ The botanical name of the English walnut, Juglans regia, means the ‘royal nut of Jupiter’.