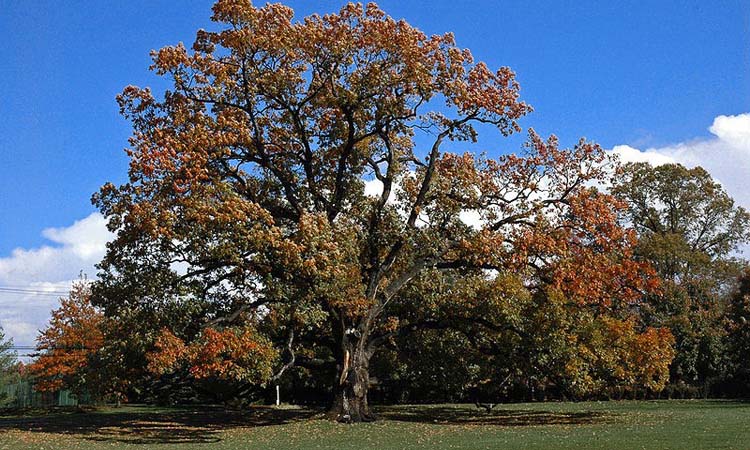 Our Tree of the Month at 4 Seasons Tree Care is the wonderful English Oak, otherwise known as Quercus robur. English oak is arguably the best known and loved of British native trees. It is the most common tree species in the UK, especially in southern and central British deciduous woods.

The English Oak is a large deciduous tree up to 20-40m tall. In England, the English oak has assumed the status of a national emblem. As common oaks mature they form a broad and spreading crown with sturdy branches beneath. Their open canopy enables light to penetrate through to the woodland floor, allowing bluebells and primroses to grow below. Their smooth and silvery brown bark becomes rugged and deeply fissured with age. Oak tree growth is particularly rapid in youth but gradually slows at around 120 years. Oaks even shorten with age in order to extend their lifespan.

Leaves: around 10cm long with 4-5 deep lobes with smooth edges. Leaf-burst occurs mid-May and the leaves have almost no stem and grow in bunches.

Flowers: are long yellow hanging catkins which distribute pollen into the air.

Fruits: its fruit, commonly known as acorns, are 2–2.5cm long, borne on lengthy stalks and held tightly by cupules (the cup-shaped base of the acorn). As it ripens, the green acorn takes on a more autumnal, browner colour, loosens from the cupule and falls to the canopy below.

Most acorns will never get the chance to germinate, they are rich food source, eaten by many wild creatures including jays, mice and squirrels. Acorns need to germinate and root quickly to prevent drying out or becoming victims of the harvest. Following successful germination, a new sapling will appear the following spring.

Interesting Fact: acorns are not produced until the tree is at least 40 years old. Peak acorn fecundity usually occurs around 80 – 120 years.

The oak is held in high regard across most cultures in Europe. The oak was sacred to many gods including Zeus (Greek), Jupiter (Roman) and Dagda (Celtic). Each of these gods ruled over thunder and lightning, and oak trees are prone to lightning strikes as they are often the tallest living feature in the landscape.

Druids frequently practised and worshipped their rituals in oak groves and cherished the mistletoe that frequents oak tree branches. Royalty has had a long association with oak trees too; ancient kings adorned themselves with crowns of oak leaves, King Charles II hid from his pursuers in an oak tree at Boscobel House and Roman Emperors were presented with crowns of oak leaves during victory parades.

In England the oak has for centuries been a national symbol of strength and survival. It has played an important part in our culture – couples were wed under ancient oaks in Oliver Cromwell’s time, the festive Yule Log was traditionally cut from oak, it features on the 1987 pound coin and is the inspiration for the emblem of many environmentally focused organisations, including the Woodland Trust.